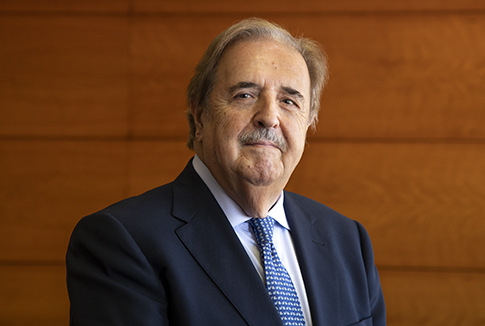 Grand Cross of the Order of San Raimundo de Peñafort.  2001

Gold Medal of Merit for Justice, 2002

Gold Medal of the General Council of Industrial and Labour Relations, 2018

Judge of First Instance and Instruction, by competitive examination in 1976 (Promotion XXIII), holding the post in the localities of:

Magistrate, by seniority (promotion), since 1981, successively holding office in the following courts:

Magistrate Specialist in Contentious-Administrative Matters, (competitive examination system), with the first number of the Promotion, holding the post from 2nd November 1984 in the Contentious-Administrative Chamber of the Territorial Court of Las Palmas de Gran Canaria, until its transformation, on 23rd May 1989, into the High Court of Justice of the Canary Islands, where he continued to serve until 2001.

Single Judge for Minors in Las Palmas – combining the post with the main post in the High Court – from 1984 to 1989, when the first Juvenile Courts were created.

President of the Administrative Chamber of the High Court of Justice of the Canary Islands, based in Las Palmas, since 4 May 1990.

He was a delegate member for the Canary Islands for the entire term of office.

As a member or chairman of the Studies and Reports Commission, he has been rapporteur, among many others, of the reports drafted in relation to the Preliminary Draft Organic Law amending the 1995 Criminal Code in the field of Industrial Property; Preliminary Draft Electronic Signature; Draft Royal Decree approving the Regulations of the General Intellectual Property Register; Draft Royal Legislative Decree approving the Consolidated Text of the Law on Social Order Infringements and Penalties; Preliminary Draft Organic Law reforming Law 4/2000 of 11 January on the Rights and Freedoms of Foreigners in Spain and their social integration; Preliminary Draft Law on Trademarks; Preliminary Draft Organic Law regulating the Right of Association; Preliminary Draft Law on the Legal Regime of Capital Movements and Foreign Economic Transactions; Regulation of the Council of the European Union on the service in the Member States of judicial and extrajudicial documents; Draft Regulation of the Council of Ministers of the European Union on cooperation between the courts of the Member States in the taking of evidence in civil or commercial matters; Ratification of the Convention on Mutual Assistance in Criminal Matters of the European Union.  And without holding the position of rapporteur, it has intervened in the Reports drawn up in the Commission of Studies and Reports on the Law on Civil Procedure, the Law regulating the Contentious-Administrative Jurisdiction, the law on the Criminal Responsibility of Minors, etc.

Judge of the Contentious-Administrative Division of the Audiencia Nacional (Second Section: Personal Income Tax and Corporate Tax), since 7 November 2001.

Member of the General Council of the Judiciary, at the proposal of the Congress of Deputies, by virtue of appointment by Royal Decree 930/2013, of 29 November. He continues to hold this post at present.

Co-founder and permanent collaborator of the REVISTA CANARIAS-CE, in which he was assigned the Section of Review and Commentary of the Judgments of the Constitutional Court —in relation to European Community Law— as well as of the Court of Justice of the European Communities, of interest in the Autonomous Community of the Canary Islands.

Correspondent of the REVISTA DE DERECHO URBANISTICO Y MEDIO AMBIENTE at the Audiencia Nacional since 2001 and commentator on contentious-administrative jurisprudence for the DIARIO LA LEY magazine since 2016.

He is the author of more than sixty individual and collective publications (usually in the field of Administrative Law), has given countless lectures in Spain and abroad, and has spoken at countless conferences, congresses and master’s degrees.