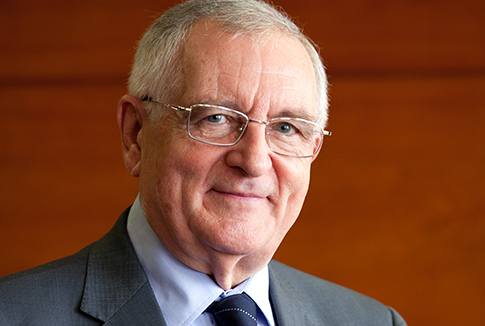 PhD in Law from the University of Bologna (Italy). Thesis supervised by professor Antonio Berliri.

He pursued his academic career at the Law School of the University of Madrid, under the chair of Professor Fernando Sáinz de Bujanda.

Professor of Political Economy and Tax Administration at the Law School of the University of Zaragoza. He was awarded the chair by competitive examination in 1969.

Professor of Finance and Tax Law at the Law School of the University of Zaragoza. He took up this chair when it was created in 1971.

Professor of Finance and Tax Law at the UNED in Madrid. In 1982 he was transferred through a merit-based public selection process.

Professor of Finance and Tax Law at the Law School of the Autonomous University of Madrid. He obtained this chair through a public selection process in 1993 and held the position until his retirement in 2011.

Dean of the Law School of the Autonomous University of Madrid from September 2000 to June 2003.

Honorary Dean of the Faculty of Economics and Business Studies of the University of Zaragoza.

Honorary Member of the Board of the Law School of the University of Vigo and recipient of this university’s Gold Medal.

Honorary Member of the Argentine Association for Tax Studies.

Chairman of the Arbitration Board for Economic Agreement with the Regional Government of the Basque Country from 2007 to 2013.

He is the author of numerous publications on Finance and Tax Law as well as translations from Italian and German of texts in this regard.

He is a member of the Madrid Bar Association.