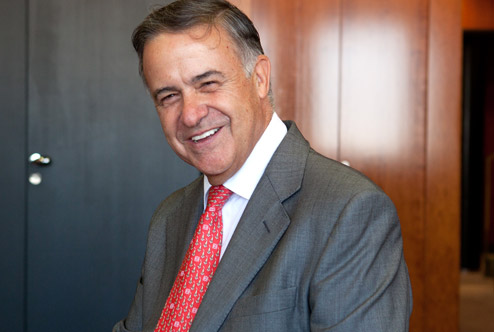 Degree in Law from the University of Seville (1964).

In 1979 he was elected as Senator for the province of Jaen and Regional Minister of the Interior of the Regional Government of Andalusia. In the Upper Chamber he formed part of the Constitutional and Justice Committees. He contributes, as a speaker, to all bills for the implementation of the Constitution and the reform of the Civil Code.

He was elected as representative for the province of Jaen in the first elections to the Parliament of Andalusia in 1982.

In 1982 he was appointed as President of the Parliament of Andalusia, being President during its first term.

In 1986 he was re-elected as representative for Jaen, being appointed Chairman of the Constitutional Committee in the same year.

In 1987 he returned as Notary for the city of Huelva and since 1988 he has practised as a Notary in the city of Seville.

In 1998 he was appointed as first Chairman of the Social Council of the Pablo Olavide University, being re-elected to the same post in 2004.

In 2001 he was Dean of the Notaries’ Association of Seville.

In 2003 he was a member of the Standing Committee of the General Council of Notaries, being re-elected to the same post in i2005.

In 2008 he was Dean of the Notaries’ Association of Andalusia.

He was Chairman of the General Council of Notaries from January 2009 to March 2010 after holding the position of Vice-Chairman in 2005.

He was a former President of the Aequitas Foundation and is currently Trustee of the Casa Ducal Medinaceli and Blas Infante Foundations.

He is President of the Court of Arbitration of the Chamber of Commerce of Seville.

He is a full member of the Real Academia de Legislación y Jurisprudencia of Seville.

He has been awarded gold medals by the Parliament of Andalusia, the City of Huelva and the Pablo de Olavide University.

He holds the St. Raymond of Penafort Medal of Honour.